I was so looking forward to this weekend.  We are in that sweet spot...that precious 2 week period between the end of Cross Country & the beginning of Indoor Track.  Nobody had to get up and go anywhere all weekend, we got an extra hour of sleep Saturday night & the race did not start until the wonderfully civilized hour of 1 PM (and if you've been a follower for a while, you know I'm not an early morning runner;))! It was setting up perfectly.  I have not done a lot of mileage since running Wineglass.  I have been trying to cross train and improve that blasted PF in my right foot, with marginal success....so I was REALLY looking forward to racing.  My family will tell you, I was a crazy person all weekend with excitement! I was just busting to get out there & enjoy a good hard run...and hopefully break my pie-in-the-sky goal of 2 hours.

Sunday dawned cold, windy & overcast...like I-see-snowflakes cold....so I had to break out pants for the first time this season :(  Oh well, cold is so very much better than hot!  I was dressed, taped and ready to go about 2 hours before we had to leave.  We finally said goodbye to the snoring lumps of teenage boys (they grunted their good wishes & promptly went back to sleep...they are clearly enjoying their coach imposed mandatory 1 week of absolutely no running).  SD was running too.  He has been under the weather the past couple weeks and definitely wasn't feeling 100%....but you know us runners...we registered, we're running. This was actually his goal race for the year, but he smashed his goal at the Wineglass Half with a 1:29 so he was just going to run easy, finish and earn his Wine Baron shirt for running both races.

Red Baron is a small race...well, organized as a small race though it's getting larger every year.  412 runners this year.  Gun time only, no medals, a cotton t-shirt, only 4 water stations & well-intentioned, but out of their element nursing student volunteer first-aid....but what can you expect for a $20 entry fee.  Plus if you have run either the Wineglass marathon or half marathon & run this race you earn a long sleeve tech shirt & become a member of the Wine Baron Club.  Yup, I'm all over the shirt again this year ;)  It is point to point.  You start at the top of the hill on the campus of Corning Community College and run rolling hills for the first 4 miles, climb a big-ass hill that goes on forever to mile 5....then say 'weeeeeeeeeeee...' for the next 4 miles as you fly down hill to town where you finish on a flat 4 miles in the center of town, if you have anything left in your quads at that point!  Although they have busing from the finish to start, we took both cars, parked one at the finish and drove the other to the start....this turned out to be the best decision we made that day.

As we lined up at the start we saw tons of people we knew.  Lots of my Ragnar buddies, friends & neighbours. It really is a great community race.  I wished SD luck & he moved up front and I stayed toward the middle.  I did not expect to see him again until the finish line.  The race started at a good pace & I was feeling good.  I new the 9:09 pace I'd have to run was really pushing it for me so I knew I needed to have a strong first 5 miles & would need to 'bank' some time on the downhill.  Mile 1: 9:05....aces for rolling hills.  Then just as I come around the corner before the 2 mile mark I see SD standing by the side of the road.  I was confused...WTF????  Then I see...he is covered in blood & limping.  He rolled his ankle on something (he thinks maybe a stick) and went down hard into the gravel shoulder.  I came to a dead halt.  His hand was dripping blood & I can see his ankle is starting to swell up and he is in pain.  I wanted to quit & help him, but he tells me help is coming and he just wants my car keys.  He says he is done but he doesn't want me to quit.  This all happened pretty fast.  Before I know it, he's taking my keys and telling me to keep running.  I reluctantly went on, but now my head is not in the game the same way.  I book it to the 3 mile mark where I know our friends are waiting to cheer us on.  I stopped again to tell them what happened & ask them to go back and look for SD.  I felt a bit better after this as I knew they'd do everything they could to find him and help him out.  Mile 2 & 3: 9:12/10:06.  I was pretty sure my 2 hour goal was toast at this point but I no longer cared.  Mostly all I could think was that the faster I ran, the faster this would be over. 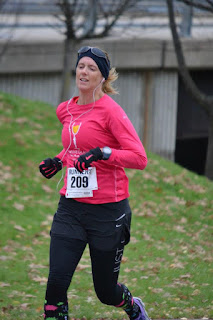 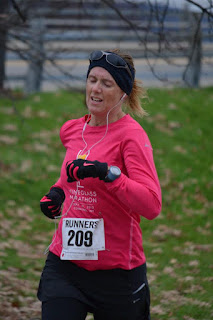 The hills were as hard as I remembered...but I got through them....finally getting to the mile 5 water station where I took 2 cups and walked until I finished them both.  Miles 4&5: 9:49 & 10:15.  It was on to the downhill.  Somewhere at the beginning of the downhill I came upon one of my Ragnar buddies and I was able to stay on her heals & run a great pace until just around the 9 mile mark, when she decided to stop when she saw her husband because her leg was hurting.  L eventually finished, but I never saw her again on the course.

Somehow after L dropped off I found myself in that strange part of a race when you are running by yourself.  I could see a bunch of runners up ahead, but they seemed mostly out of reach. Same for those behind me.  Around 9 there was finally another water station....boy that is always a big stretch without any.  I walked again with 2 cups because I knew there wouldn't be another until around 12...another big stretch.  With no one to push me but myself, my pace dropped off.  I actually wasn't really looking at my watch much because I felt like I was going at a decent pace.  Not horrible, but not great if I wanted to PR.  It got windier around mile 10 & I started to feel cold.  My legs felt ok.  Actually, better than ok.  No knee pain, no foot pain.  Just that regular tired from going 4 miles down a hill.

So with less than a mile to go I knew I could PR if I just kept up the pace. I crossed the line at 2:05:02 which is a 48 second PR.  I saw SD right away.  He can barely walk & his foot does not fit in his shoe! He shows me & it is the size of an orange!  So he tells me that he waited for a while for help to come to him but it didn't so he ran about half a kilometer up the road to a police car & the trooper got his first aid kit out of his trunk and cleaned him up by the time the official first aid folks arrived.  I felt HORRIBLE for him!  We didn't even grab anything to eat. I took the water someone handed me and we went home to assess the damage. SD experienced his first DNF ever.  He says that is the worst part.  He refused to go to the doctor yesterday, but today we are going.  It is not broken, but he is in a lot of pain and we are going to get it checked out.

Putting It Out There...

I am lucky. I have a great husband, children, family & friends. I have a job I love....even when it frustrates & exhausts me. Even though we did sustain some damage to our house during Sandy, we still have a home when others tragically don't. I am thankful I have the opportunity to run tomorrow when others can't. So I'm going to put it on the line here. I usually keep my goals close to my chest...a quiet hope. But tomorrow I'm going for a sub-2 in the Red Baron Half Marathon. I'm running because I can....even with my bum foot, I can still run. It will not be easy...not by a longshot. When I feel tired & sore I will think of how lucky I am; how I have become strong mentally & physically. My heart aches for all those whose lives have come to a standstill in the wake of Sandy. 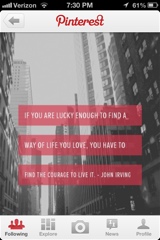 Posted by The Unexpected Runner at 7:47 PM 9 comments: