I didn't even mind being sleep deprived having to go to work a nightshift after this! Here is a link to  my son & his friend being interviewed afterwards:

I hope to call myself a MARATHONER!!!

I got up early (because my dear sweet husband is still jet lagged & seems to need to share his inability to sleep with me) so decided to head out to find my neighbour who was struggling to get 15 in this morning. I'm not an early a.m. Runner but I have to say that it was glorious today. Had a nice easy run/walk. I can't wait til next Sunday! 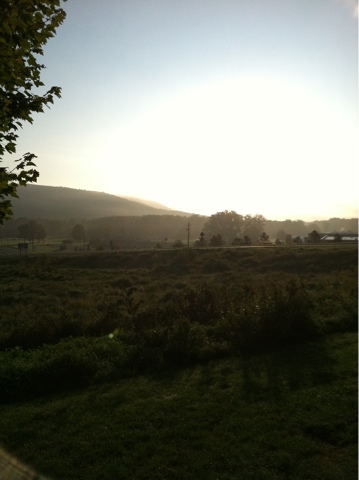 Posted by The Unexpected Runner at 6:55 PM 4 comments:

Email ThisBlogThis!Share to TwitterShare to FacebookShare to Pinterest
Labels: The most beautiful fall morning yet

Wineglass Marathon: you are the coolest...giving back...

How cool is this: The organizers of Corning, NY's Wineglass Marathon want to give back to the community so they not only have arranged for DICK BEARDLSEY!!!!! To speak to the community at the high school but they have arranged to have him come speak to the XC team (that my boys run for) on the eve of a huge meet. As if that weren't enough, they are arranging for Tracy Peal, a well known POSE method coach to speack & possibly workout with them!

I am THRILLED & PROUD to have the Wineglass as my very first marathon! What a great organizing committee! If you want to BQ next year, I encourage you to check us out. We are flat & fast!

I want to thank everyone who offered such encouraging words during my recent freakout/battle with self doubt...I really appreciate all the support I've received over the past few months from the blogosphere. I am here on the cusp of something I never EVER imagined I would do. I'm nervous. I'm a little bit scared. But the one thing I'm sure of is that I'm going to cross that finish line :). So I need some help. I need approximately 5 1/2 hours of tunes in my brand spankin' new MARATHON playlist. What revs you up? What keeps your feet moving during those long middle miles? What gives you inspiration through to the finish line? I like pretty much everything (except country...well except for Johnny Cash...how can you not like the man in black???)
Posted by The Unexpected Runner at 10:40 PM 7 comments:

So I am freaking out! It is 17 days to the Wineglass Marathon. Am I ready?  I don't know.  I followed the plan but my nerves are getting the best of me.  There are NO MORE LONG RUNS till race day! Was a 20 miler long enough for a long run??????  And what about race day strategy?  Stay upright & moving seems like a good strategy ... but maybe I need something a little more specific?  I did speedwork today & it went ok...my last interval was a bit slower than my 9:19 target but I still felt good during the workout: 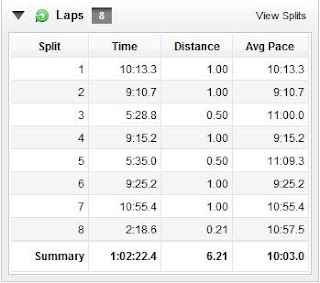 My original goal still stands: TO FINISH.  I think I can do this.  I am considering buying this: 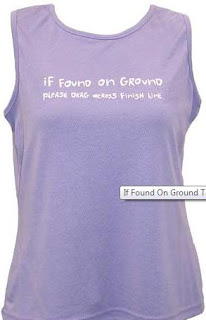 I need advice from all you experienced marathoners out there.  How do I attack race day? Do I just run by how I feel, join the pace team (I'm not a chatty runner. I like my music & being alone in my head).

Posted by The Unexpected Runner at 1:57 PM 7 comments:

Flooding, State of Emergency, Mandated Working ... and a little running

So I've been out of touch this past week.  You may have heard about the flooding in Pennsylvania & NY...not sure how big the news was nationwide, but suffice it to say, I have never seen anything like it.

They say a picture is worth a thousand words...


Sayre, PA was the westernmost affected flood location. Luckily, I live 40 miles west & was personally safe. The hospital exit was the last open on the interstate from my direction so I was called in.  Dozens & dozens of doctors, nurses & support staff were unable to get in from the east, north and south.  I was glad I could get there! Exhausting though! I have never had the experience of being mandated and not allowed to leave.  We had no potable running water. The OR's were closed. The county was officially in a State of Emergency.  A nursing home was flooded and our auditorium is now a residence for many, many senior citizens.  I am exhausted and thankful that my family is safe and dry. The same cannot be said for many of my co-workers, some of whom showed up to work despite their own personal tragedies.  I am in awe at their strength, courage & dedication.

By the time I was finally released from work I was exhausted, collapsed into bed & for the first time did NOT travel to Thing 1's XC meet on my saturday off.  I felt like a bad mother...especially when he PR'd by a minute and a half, finishing 17th overall with a time of 20:34 for 5K!!!! He told me tonight that he may snag the 7th Varsity spot for this weekends meet! I am so proud! 1st place wins for Varsity & JV boys and JV girls!

By the time sunday rolled around I had a measly 8 miles in for the week & my long run that had been scheduled for thursday had been thrown to the wayside due to the circumstances.  Sunday came & though I didn't get out until the afternoon, I finally...FINALLY....got in a GOOD 20 miler! It took 3 hours 58 minutes, but I did it without any walking!  Less than 3 weeks to go....I think I got this!