This was it. That is what I thought as I lined up at the start...not at the very back like I usually do but at the very front of +4 hour corral.  I was not here to finish. I was here to race...against myself & the clock but make no mistake, it was a race.  I hit play on my ipod & Back in Black blasted into my ears.  I didn't even hear the announcer say 'Go'.  I just looked forward & walked til I hit the mat and started to run. I was ready for this to be hard.

Toronto is marketed as a downhill course. It is a net downhill in the first half but there are a few big hills thrown in to keep the unprepared cursing.  I've run this before.  My PR on the course is 4:43. I knew what was coming.  My plan was to run strong & steady, attack the downhill and run solid going up.

Miles 1-5: 9:30/9:03/9:51/10:05/9:57 Straight down Young St.  When I started running I was just trying to find my solid steady pace.  Trying to ignore the crowd, I went to the outside and tried to ignore them simply finding my groove.  The first couple miles of any race are the crowd thinning and everyone finding their spot. I heard a couple guys near me commenting about how all these people passing us were going to regret it later.  He was right and I took note of a sensible runner and hung in the general vicinity of him.  The pace chart I'd written on my arm had a 9:54 pace.  I knew that anything under 10:16 was sub 4:30 so my goal was to hang as close to 10 as possible.  Right on track even through the steep 1/2 mile climb from 2.7-3.25. My quads weren't so much tired as they were a little sore from standing at a ballgame the day before. Nothing to be done about it so tried to just ignore it. Reminded myself that I am lucky to be here.  Lucky to be able to run.

Miles 6-10: 9:37/10:00/9:54/9:35/9:48  (10K split 1:01...exactly on track) Mostly downhill with a few rolling inclines. This is where we take a right turn into a pretty swanky residential neighbourhood.  We ran past Upper Canada College and Casa Loma.  Very pretty and a nice distraction.  I had my first gel at 7 miles.  I took a small piece of banana from the aid station around 8.  I felt pretty solid.  I thought I'd lose the armbands by now but the breeze was cool and the streets were shaded.  I kept them.  I was mostly running by myself.  Not much of a crowd around me by mile 10.  My right knee, where I slammed it against a bed at work on Thursday & had a lovely bruise was starting to ache.  I threw down a couple acetaminophen that I'd brought just in case.  I thought I'm stronger than a bruise. Keep going. Keep steady. Try to ignore the breeze picking up.

As we headed downhill at the end of mile 10 we met up with the half-marathoners.  What a different experience this corner was this time! Two years ago I remember a rush of people coming together from 2 directions to head onto the Rosedale Valley road.  Today though, we were meeting the frontrunners! That is both humbling and very cool.  I started to get passed and had to tell myself that these people were only running half the distance I was and to stay cool and steady.  In the Rosedale Valley it was calm, no wind and the sun shone.  At mile 11 I finally ditched the armwarmers.  As we exited and headed into the downtown core the wind started to pick up.  I was able to stay solid through this.  It was gusty at times but was not solid the whole time.  I'm not really sure how fast miles 15 or 16 were because the gps was getting blocked by all the tall buildings.  15 says 10:52 and 16 says 9:21. I felt steady so I'm going to average them at 10:07 pace.  My 1/2 split was 2:09:57......it doesn't get much closer than that to be on track! When I hit the half mat and saw my split I was thrilled! I told myself to keep my head in the game and stay strong.

As mile 16 finished we split from the half-marathoners again.  It's a hard split.  They are all excited to head into the finish, and we marathoners head to out on the long lakeshore loop.  The wind was in my face.  I could feel the headwind getting worse with every step I took.  I told myself at mile 16 that I can run 10 miles any day of the week. At mile 17, with the headwind straight on me I told myself that THIS was why I trained through the crappy winter.  This was why I did all those mile repeats in 17 layers in freezing temps on a windtunnel like 1 mile stretch of road. By the time I got to mile 20 it was gusting at 25mph. I told myself that eventually I had to change direction and it would be better...but for now this is what I trained for....for the hard that every race throws at you at the end.  At least it wasn't snowing or raining I told myself.  I looked down at my bib and the message Kathrine Switzer had written to me "You can do this" and told myself to be fearless. People walked but I ran.  I kept running.

I continued to just plod steadily into the wind.  Tried to stay upright and not lose my hat on the bridge! When I hit the 35km mark where the turnaround loop was in East Humber Bay Park I was roughly 3 minutes behind my 4:20 goal pace. 3 minutes....that's all, I thought...I can DO this, I thought...then I was incredulous as the wind was still in my face after making the loop back towards the finish.  The headwind continued until we were back over the bridge...so about 2 km more (1.2 miles). Then the calm was so sweet.

The last 5km were so emotional for me.  I KNEW...really KNEW that I was going to do it.  I was trucking along passing people like crazy.  I wasn't just going to beat 4:30...I was going to crush it!  I was tearing up heading down Lakeshore back towards the crowds and the finish line.  I barely saw my SIL as she shouted at me. I DID see the big smile on Thing 2's face as he started running beside me just before the turn into the chute.  I crossed the line with tears running down my face.  I had done it.

This race has taught me many things. 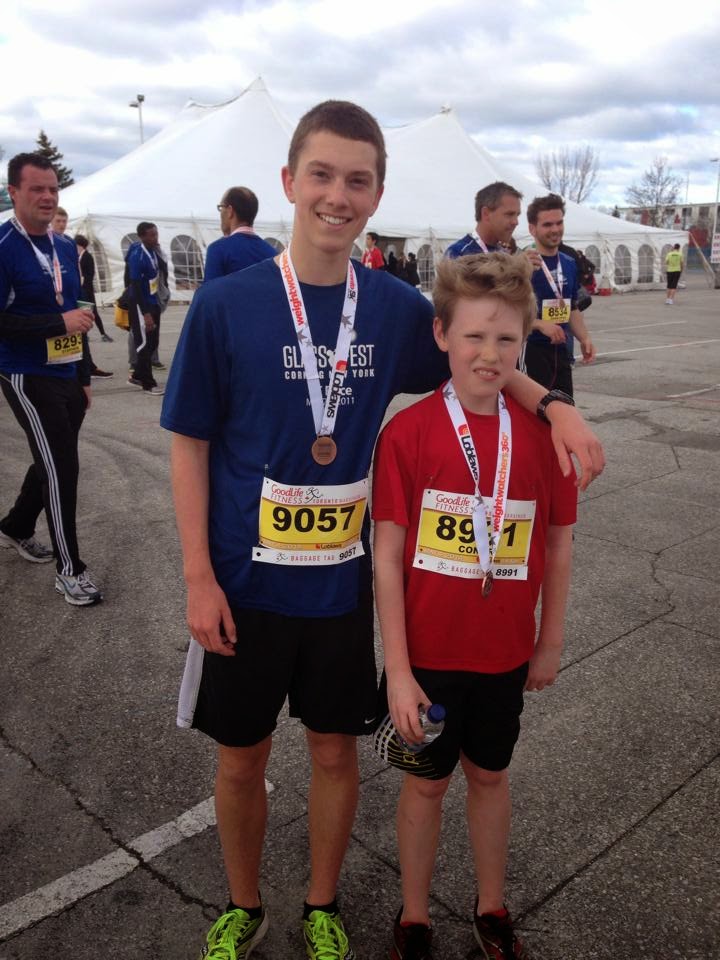 Posted by The Unexpected Runner at 12:25 PM 8 comments: 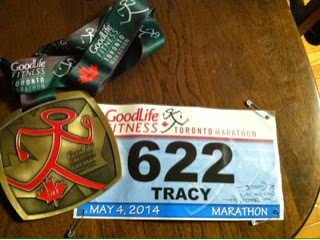 I can do this! So I'm all in! Can't help but be inspired carrying her message to me on my bib! 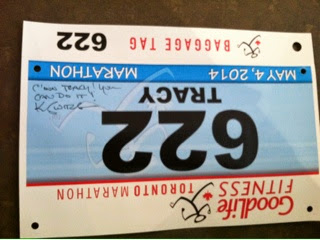 This is it!!!! Cross your fingers for me! 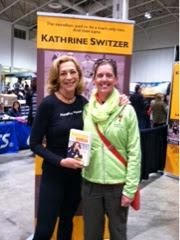 Posted by The Unexpected Runner at 8:38 PM 3 comments: