As I got ready to run this morning I commented to my husband that "I'm not sure running 3 miles is even worth it". But I laced up my shoes & went out to run 3 miles because 3 miles is what Coach Heather told me to run today. Then about a mile into my run I realized that I am LUCKY to be able to run 3 miles! I have patients that can't even walk to the bathroom let alone consider running anywhere...can you even imagine??? I also remembered a time when I couldn't run to the next street light without huffing &puffing & swearing in my head. 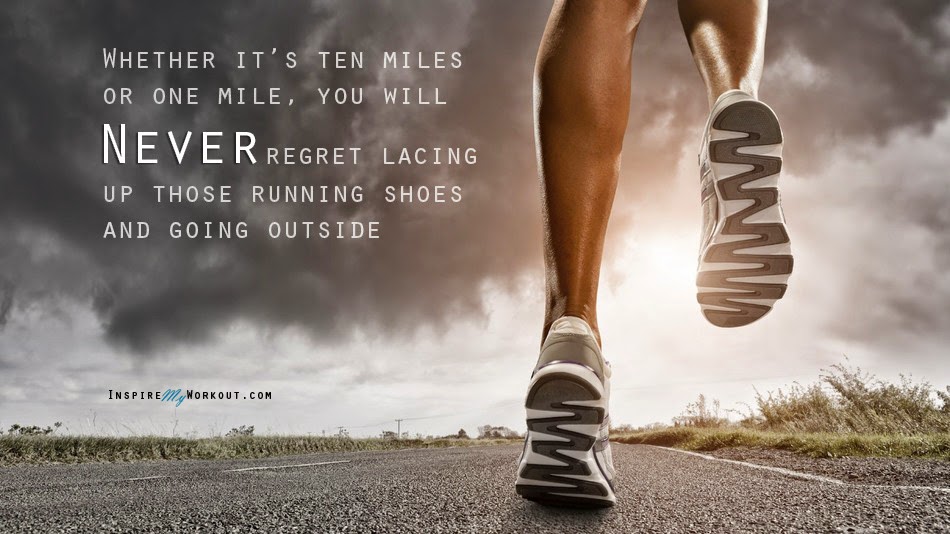 So today I remember how far I've come and am very thankful for it.

....and now I've going to go get out my staple gun and re-cover some chairs...because it's only 9am on my day off, my run is already done and I have WAY too much time on my hands ;-D
Posted by The Unexpected Runner at 9:21 AM 2 comments:

It is officially 10 days to Marathon #6 (and time to start stalking race day weather reports! LOL!) so I thought I would review my training up to this point.  Besides, during a taper, what on earth am I supposed to do on my days off when I am not running/working out half the day????? Clean my house...nah...

After having failed x 3 to beat Oprah...go sub 4:30...I decided this time to take a completely different approach.  Either 4:30 was way beyond my capabilities (I don't think so) or I am doing something wrong training.  So as you know, I hired a coach.  Although I do know Coach Heather, I haven't actually seen her.  She is basically an email coach. She sent me 2 weeks of workouts at a time and we emailed back and forth about how they were going and making adjustments from there.  One of the things I asked of her was a more Hanson-esque type plan.  I wanted shorter long runs but with more race pace challenging effort.  To this end she delivered for me.  I can honestly say that I would have NEVER put myself voluntarily through some of the speedwork, hill repeats, or progressive tempo long runs like she had me doing.  Even when the result was less than what I hoped, I knew that my body was getting the best possible training out of it.

We trained for my unicorn goal of 4:20.  Figured, why not? Even though I have no idea how it happened, I was able to lay down that 1:56 half in November so I figured I'd at least give it my best shot.  Here's how it has gone so far:

Speedwork:
In the early weeks I ran by effort.  Speed burst of X-minutes @ what feels like 5K effort etc.  Then we progressed to hill repeats (possibly the devils work ;)) and strides at the end of runs.  Once I had a feel for what it felt like to run fast she bumped it up asking me to go into the 8's during the speed/tempo runs.

Long Runs:
Again, we started with just running easy, but then she had me starting to throw fast race pace miles in during the middle, or run the bulk of my run easy and then finish with 2 or 3 race pace miles.  These fast finish miles really challenged me! I didn't always make it on goal but I did it enough and close enough given the conditions that I considered it good.  The weather challenged me the most this training cycle.  I have never before had to resort to the dreadmill for a long run but I did this time.  I thought I was going to die of boredom and it was the most mentally hard run I had, but I did manage to get through a 14 miler on the darn thing! I ran many long runs on tired legs.  My longest run was 18 miles....and it was probably the most I was mentally 'present' in any of my runs.  It was a progressive tempo run broken into 4 - 4 mile sections and then a 2 mile sub race pace fast finish.  I had to concentrate to run my target paces for each section.  It was hard but it turned out well.  That is not to say that all was coming up roses in the long run category.  I had a couple that just plain sucked. I was tired, I was slow, the wind was fierce and I just didn't want to run anymore. But I am going to consider those runs good mental training because I finished them.  My last long run was a 15 miler on Sunday and I ran it at an even 10 minute pace and felt pretty good.

Except for the last month, due to time constraints, I mixed in some swimming and biking cross-training.  I feel like I have it in me to break 4:30 (That would be a huge 7 minute PR) but I also feel that given the right conditions on race day, I really could pull off something in the 4:20 range.  I really don't know how it will work out, but I am going to hope for the best and just go for it.

Posted by The Unexpected Runner at 1:40 PM 3 comments: